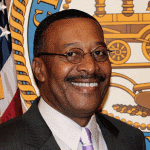 Rick Flanagan was appointed as Emergency Management Coordinator for the City of Houston in 2014. In his role, Mr. Flanagan oversees the emergency management program for the nation’s fourth-largest city, which includes the coordination of disaster mitigation, planning, response, and recovery.

Prior to assuming his current role, Mr. Flanagan served in the Houston Fire Department (HFD) for over 34 years, retiring as Executive Assistant Chief for Support. In this role, he oversaw HFD’s Information Technology infrastructure, Human Resources and Member Support; providing wellness and family support to Firefighters and their families. Throughout his tenure with HFD, Flanagan served in a variety of command positions, including management of logistics, community outreach, public information, communications, training, fleet operations and others.

He oversaw the migration of personnel and operations of Fire & EMS Dispatch to the newly created Houston Emergency Center (HEC). This facility merged the dispatch operations of the Houston Fire Department, Houston Police Department, Greater Harris County 9-1-1 Emergency Communications Network, and the Office of Emergency Management.

He has played an active and key role in many emergency responses throughout his career, including acting as Deputy Area Commander for the Hurricanes Katrina & Rita Rescue Task Forces in 2005. Working at the Reliant Astrodome, he represented the City of Houston’s efforts to provide on-site medical screening, find housing, jobs, clothing, schooling, transportation, and restoration of family units for more than 40,000 evacuees.

He is committed to motivating children to succeed. He is an avid golfer and shares his enthusiasm as a coach and mentor for junior golfers..